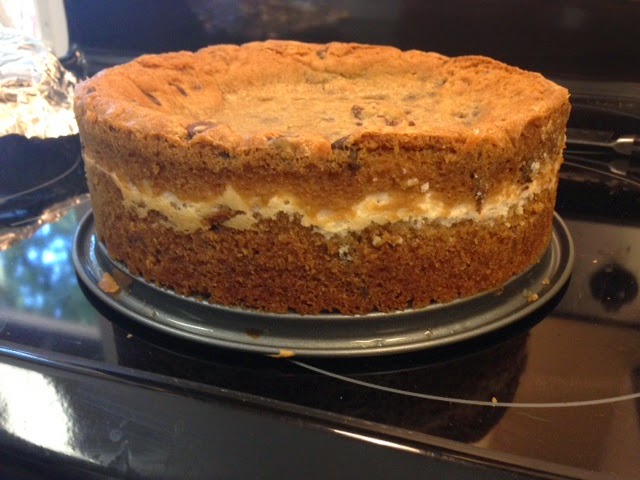 This has not been the place to find healthy, lighter fare lately. Sorry about that. I'll get back to some lighter stuff, I swear. In the meantime, tell yourself you'll eat healthy tomorrow and make this instead.

I usually try a recipe a couple of times before I put it up here, but the reaction to this was so big that I just decided to go with it. That's why some of the pictures aren't so great. Normally, I wouldn't have foil hanging out in the background, like in the one above. Plus, our new kitchen isn't as big well-lit and colorful as our old one, so pictures have been a bit of a challenge.

I struggled with what to call this thing. Cheesecake-stuffed cookie? No, it's not really just one cookie. Monster Cookie Cheesecake? No, too close to Cookie Monster Cheesecake, which brings other images (and possible copyright infringement) to mind. The big, round layers of dough remind me of the pizza-sized big cookies my mom used to make for our birthdays as a kid. That was a weird fad in the late 80s/early 90s. I enjoyed them, but always felt a little cheated out of cake. I guarantee you won't feel cheated when you try this.

Lots of vegan cheesecake recipes use silken tofu, which is a good way to get that cheesecake texture. I decided to go for a more traditional approach, one based on the way a lot of dairy cheesecakes are made. This one is a very simple and straightforward vanilla cheesecake. You can personalize this a million different ways. Mix in chocolate or peanut butter or change up chocolate chip cookies for some other favorite kind for the crust. The possibilities are endless.

I used Tofutti vegan cream cheese for this because it's very close to dairy cream cheese in taste and texture. Trader Joe's makes an excellent vegan cream cheese as well. Just be careful: Tofutti makes a herb and chives variety of their cream cheese that has very similar packaging. Always double-check before buying it. That stuff is delicious, but would be just awful in this recipe. 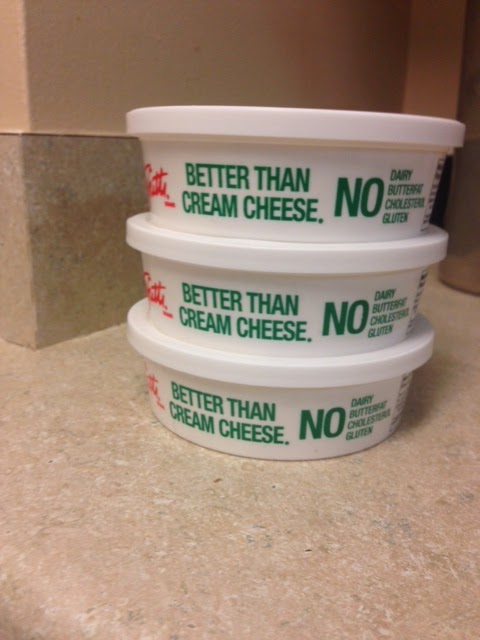 Preheat the oven to 350 degrees

Make the cookies: Combine the sugars, oil, milk and cornstarch in the bowl of a stand mixer (or use a hand mixer) and beat until they're well combined. Do this for at least two minutes, so the sugar and oil completely combine and the mixture looks like caramel. Mix in the vanilla. Add in the flour, a half-cup at a time, along with the baking soda and salt, while the machine is running. Mix it until it's well incorporated, then add the rest of the flour until you're finished. At this point, you'll need to fold in the chocolate chips with a wooden spoon or spatula.

Take the bottom off the springform pan and cover it with either plastic wrap or parchment paper. Put half of the cookie dough on and spread it out into a flat disk the size of the pan. 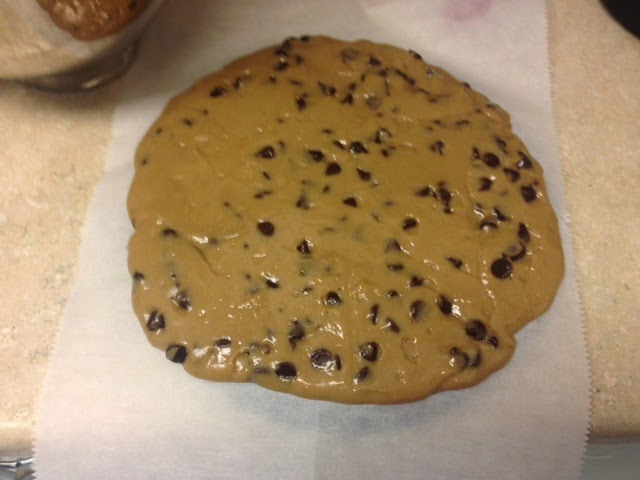 Make the cheesecake: Empty all three containers of cream cheese into the bowl of a stand mixer. Mix at high speed for about a minute to get it whipped and creamy. Add in the sugar, egg-replacer mixture and vanilla and beat on medium speed until the whole thing is smooth, whipped and creamy. It'll go from this: 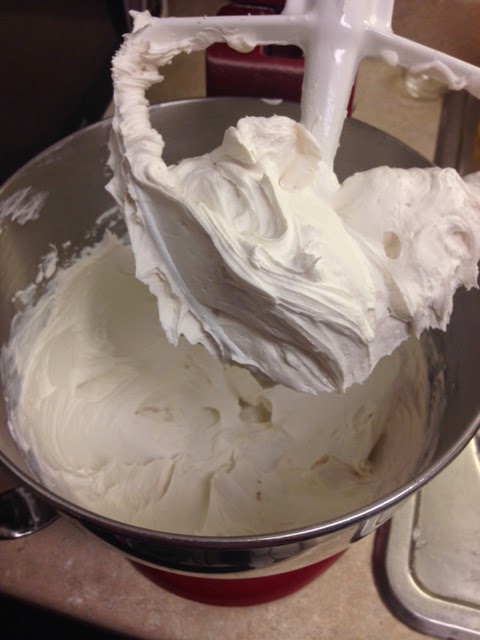 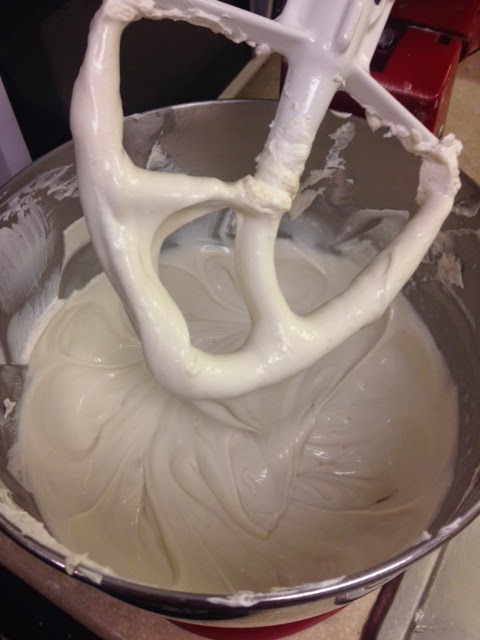 It's ready pretty fast, so if you're cookie dough is still firming up in the fridge, you can put the filling in there as well.

Now it's time to put it all together. Lay everything out in front of you first. If you haven't already, reassemble your springform pan. Lift the top cookie layer up by the parchment and flip it over into the pan. Try to get as close to centered as you can. It won't really fit, because the dough was shaped to the outer edge of the pan, which is now covered by the sides. Push the dough out to the edges and work it up the sides of the pan a bit. 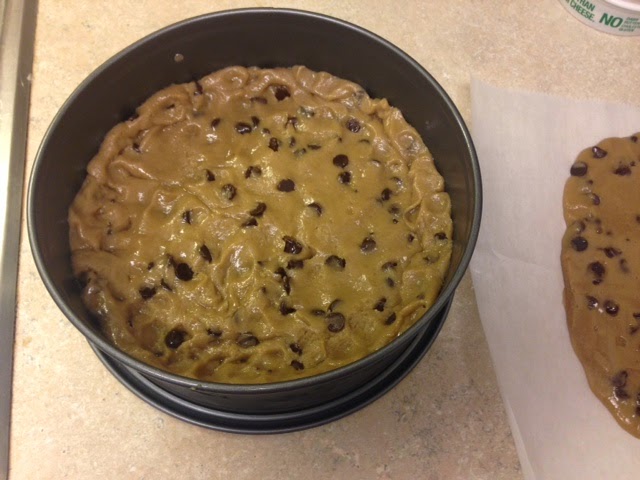 Now pour the cheesecake on top of the cookie dough. 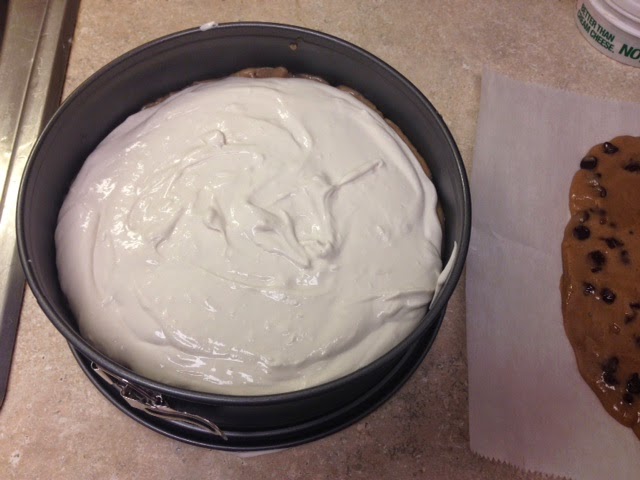 Finally, gently flip the other cookie dough disk on top of the cheesecake mixture. This one you really do have to try to center. Push the dough out to the edges of the pan so that none of the cheesecake is showing through. It'll basically be floating on cheesecake. 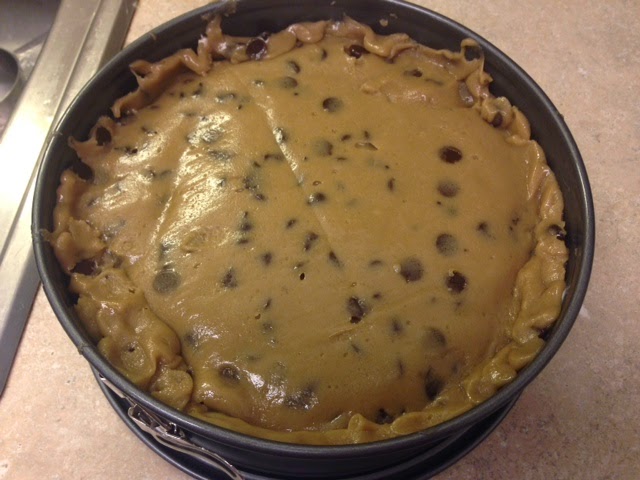 Cover it with foil and bake for about 40 minutes. Then take the foil off and bake for another 10-12 minutes. Watch it closely at this point. The middle of the top layer of cookie dough may not look completely done while the rest is browning nicely. Even if it doesn't look done in the middle, pull it out if the edges are starting to burn. The middle will be done enough to be fine.

Let it cool on a wire rack for about 20 minutes, then cover it with the foil and move it to the fridge for at least 8 hours. I know, I know: it's asking a lot to let something like that just sit in your fridge uneaten. Trust me, it's worth the wait. 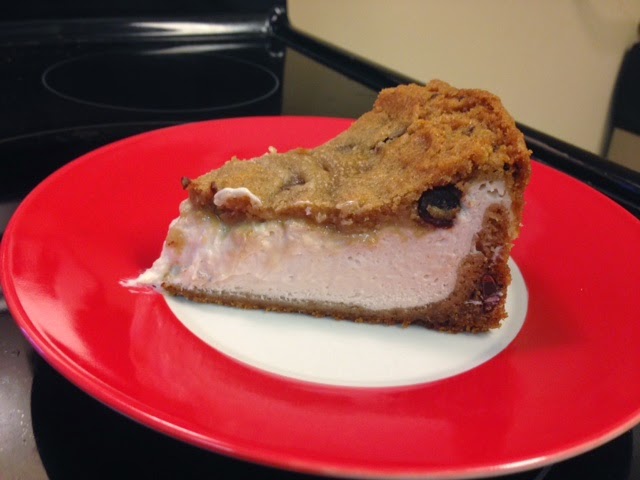